It only happens among women, that kind of ribbing, especially among those who have shared serious disruptions and ruptures, and in the retelling later, curiously laugh some more. Some 20 women, all officers and members of Unhan Kabbayen-an Han Tinabangan Organization (UKTO) and their “assistants,” a motley crew of kids and teens, climbed the newly built concrete stairs to reach the cave.  Just as they keep house, they keep cave now, at least once a month, to make sure that their ancient sanctuary is always clean, ready and intact.

Limestone cliffs ring Sitio Sabang, Brgy. Tinabangan in Marabut, Western Samar. On one of the rock faces eyeing the town, the cave yawns, a daily landmark for locals on the narrow access road connecting their coast and their village to the highway.  The mouth is modest, around eight feet in height, but the kids’ playful spotlights as they traipsed familiar tongue paths – revealed at least two ballroom-like caverns with a packed dirt floor, and several tributaries that time hollowed out.  With the town pockmarked in caves, the women couldn’t agree on the name of this particular one – Tinago or Tinabangan – so they stuck to how kids called it, simply, the Waray lungib.

“Dito ang panghi!”  (The stench here was so bad) Suzette Bagunas, 42, giggled, her nose remembering and pointing to the corners where and how a thousand people peed and pooed in the primeval shelter snug, a wee bit crowded but safe from a super storm.  “Yolanda, ang babaeng malakas ang dating!” (Yolanda, the “woman” who overwhelmed!) Lorna Ortillo, 60, quipped that she wasn’t surprised the strongest typhoon ever to hit their town of Marabut in their memory is named after a woman.

Outside the cave on that howling morning of November 8, 2013, typhoon Yolanda (Haiyan) engulfed their entire coastal community. “Nung mga 4 p.m. ng  Nov 7, medyo maaraw pa pero marami nang tao sa lungib” (At 4 p.m. on November 7, the sun was still weakly shining but there were already many people in the cave), remembered Ortillo.  She and Suzette, both officers of the women’s group, UKTO, mobilized their members to go bandilyo (town crier) and urge people to leave their houses beside the sea because the warnings were clear from news reports and the local government that “baka tumaas ang tubig (the waters may rise).” 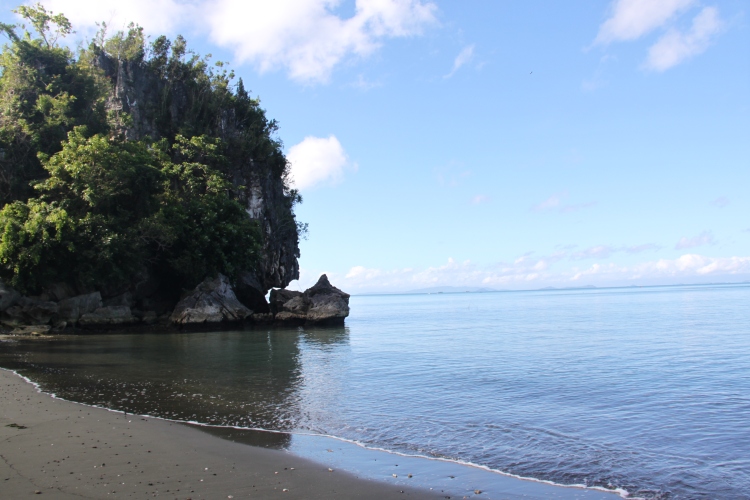 They are of fisher stock used to the moods of tide and water, and familiar with the ebbing rituals of river meeting sea.  This time though, instead of flowing out, water rushed back to claim land.  Rise that river did, and rampage the sea did.  The cave where the entire sitio of 1,176 sheltered is as high as a three-story building.  Ortillo recounted, “Wala kaming evacuation center pero alam na namin kung saan pupunta,” (We don’t have an evacuation center but we knew where to go).

In modern tourism pitches, Samar is “caving capital of the Philippines” and visitors have gone subterranean for adventure.  Locals though have always had a more primordial connection to their caves as wombs and tombs – physical shelters from storms, earthquakes, wars and most external ruptures, and in their individual world’s end, as final resting places for the dead.

To reach the cave, Tinabangan residents had to clamber up ten meters of clayish soil and limestone boulders so many opted to bring only overnight packs with a change of clothes, some food, mobile phones, portable radio units and battery-operated flashlights.  By 7 p.m. the rain intensified and all thousand and a hundred people inside the cave were on their own, mobile signals and radio airwaves played on dead air. “Zero ang communication,” Ortillo remembered the mindful moment when they were just aware of present and presence, unknowing of anything beyond the cave, not kith, not kin outside. 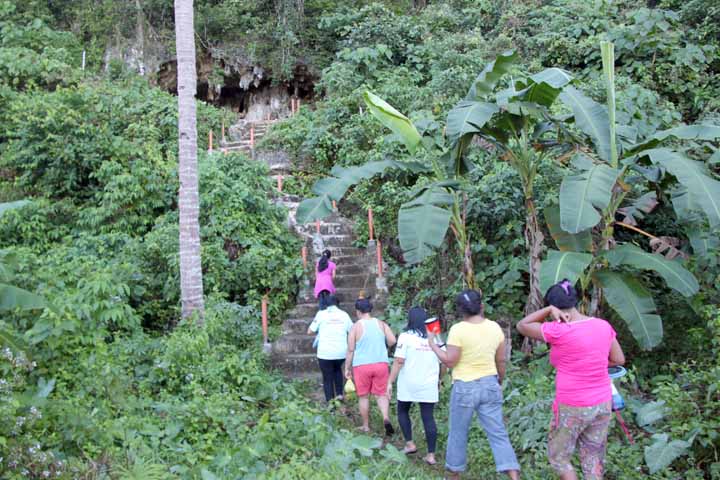 Those who were nearest the lookout holes above the entrance of the cave felt the first tidal waves crash around 5 a.m., covering the canopies of the coconut trees. “Karagatan sa baba” (it was akin to an ocean outside of the cave), Bagunas said, still shivering from the memory.

When they finally clambered down from the cave  the next day, it was as if they were back to prehistory.  Only the cave was shelter now, Sitio Sabang was wiped out with only two concrete structures standing sans the roofs.

All thousand and a hundred man, woman and child were houseless but alive.  According to the local government’s  report, all of Marabut’s 15,946 houses were destroyed,  Majority of the townsfolk sought shelter in the five caves scattered in the town’s hills.  The 20 people dead and eight missing from other villages all chose to stay low in the ground.   Across San Pedro and San Pablo Bay from Marabut is Tacloban, an hour’s drive away, where six thousand died and a thousand more are missing.

“Basa ang lahat ng bigas.  ‘Pag niluto, lugaw na,” (All the rice grains were submerged and wet. They were congee-like when we attempted to cook them) related Ortillo. “May pera kami pero wala kaming makain” (We had money but we had nothing to eat), the painful lessons on food security were something they wouldn’t forget, Ortillo said, as many survived on coconut flesh and coconut water for days before external aid arrived.

Ortillo and Bagunas both chewed on their thoughts for long seconds when asked if they felt powerless. A gift of the disaster was that they forgot anxieties from the past and for the future, and as with many communities whose lives were disrupted by weather changes, faced the immediacy of the present.  Outsiders expected media-fed frenzies of looting and outdoing, but there were none of these.  They harnessed what they thought they did not have:  their own power.

Instead of self-interest and preservation of immediate family, “maraming nagkusa” (many volunteered), Bagunas twinkled at how collective resilience prevailed.  “Yung may natirang pagkain, namigay sa kapitbahay na walang-wala” (Those who had food left shared them with neighbors who had nothing).

“Nakaramdam ba ako na powerless kami?” (Did we ever feel that we were powerless?) Ortillo quipped, “Aba, oo! Wala kasing kuryente!” (Of course we did!  There was o electricity!) The Western Samar grid was crippled, and would stay so for a couple of months, but in the few days post typhoon Yolanda, stores fully depleted their stock of dry cell batteries and the whole Sitio Tinabangan grappled with darkness. “Sinauna talaga” (we went back to the past), Ortillo remembered the bonfires as locals salvaged the debris for light and cooking, and then slowly, as supplies arrived, “balik sugaan” (back to gas lamps).

When another typhoon, “Hagupit” (international name: “Ruby”) hit Samar a month and a year later, in December 2014, the lessons, hard learned and hard lived, found traction: they sought the cave early again, they stored sacks of rice and potable water high up in the caverns, and with hardwired training as barangay health workers, “inayos namin kung saan iihi at alam mo na!” (we set aside a corner where people can pee and you-know-what!)  Cave blueprinted.  Garbage area identified.  Dirty kitchen designated.  And dangerous passages and tunnels where treasure hunters dug deep were yellow roped.

“Kanya-kanyang latag ng banig” (Everyone laid out their mats), Bagunas chuckled, “may nagtitinda. May nagkatay pa nga ng baboy at nagbenta!”  (there were all kinds of vendors, some slaughtered a pig and even sold the meat!) Ortillo agreed, “Parang fiesta!”

While the thinking and application were meticulous for disaster planning to-do’s, for their energy needs though, the hindsight is painful.  “Ay, may nagdala ng generator” (Someone brought a generator) Ortillo admitted sheepishly, “meron ding rechargeable flashlights pero karamihan, de-baterya” (there were also rechargeable flashlights but most were battery operated).

This is the behavior crack that renewable energy advocates put down as lesson: unlearned.  The Institute for Climate and Sustainable Cities (iCSC) observed that in disaster mitigating, the people’s energy needs are always an oversight, and in rebuilding, always a hindsight.  The storyline is lost, somehow, says Uro Tahup, iCSC Program Manager for Western Samar.  In rebuilding after a disaster, communities go back to their limited energy options using generators and dry cell batteries not realizing that fueling  these greatly contribute to massive weather disruptions that spawned the likes of Yolanda and Hagupit in the first place.

“Communities are already mining their traditional knowledge for disaster preparedness,” Tahup said, “If they go to the caves for shelter, we go to the caves with them.”  In September 2015, iCSC’s trained “Solar Scholars” put renewable energy in dead center of disaster response.   The women from the Pambansang Koalisyon Kababaihan sa Kanayunan (PKKK) were coached to operate and manage four TekPak units, a handy lighting and charging system with three LED light bulbs and inverter powered by a 100-watt solar panel.  Ortillo’s and Bagunas’ women’s group, UKTO, is a member of PKKK.

At the appointed time, sirens blared to signal the start of the disaster drill.  Bagunas, herself a Solar Scholar, nodded to the advanced team, also scholars, who clambered to the cave and positioned the TekPak to provide strategic lighting for the incoming “evacuees.”  Other scholars, joined by barangay health workers made up the medical team and set up base close to the TekPak, equipment ready.

From the basketball court where they gathered, a hundred men, women and children stepped up to the simulated dance with props of mats, radios and food.  Tahup remembered that while the mood was light with plenty of teasing, he knew mini revolutions were erupting.  “Just to get people to remember disaster lessons is important,” Tahup said, “just to get people thinking about their energy needs and how they use energy way before disasters and then after, ah, that is revolutionary.”