Summer is beach time, always has been it would seem, especially for the young generation. It’s all about sea, sand, surfing, sunbathing, and whatever activity there is that happens in the beach. But there was a time when summer to my generation—Manila-based kids during the ‘70s—meant going to the province for vacation with relatives. It was not the image of sea and sand that constituted memories of childhood summers, but hiking, and tracking and exploring streams or rivers. For this writer, it was the image of the mountain, coconut trees, hidden small rivers, in Gumaca, Quezon, that’s etched in that part of memory.

When I was in grade school, we used to go to Gumaca to visit my paternal grandfather who after retiring had himself built a hut in the upland. His main source of income then was paglu 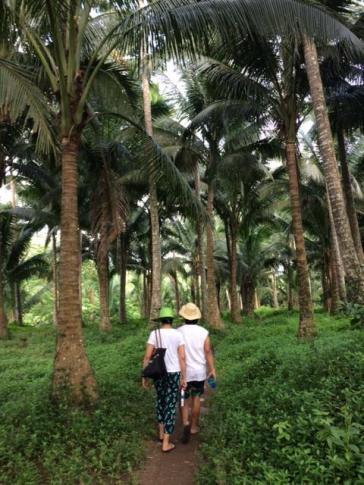 lukad, when copra was still a thriving industry. It was always Holy Week when we went there with my aunts, uncles, and cousins. It would take us an hour or so to reach lolo’s abode on foot, but to me then it would seem like the time spent walking stretched into hours on end, and meanwhile our luggage and other stuff, which I envied, would be carried by at least two horses. We would pass by streams where we were reminded to recite incantations asking permission from the river’s diwata to not cast a spell on us, or to do the same when we would spot tiny promontories, jutting out near trees, that we knew as being the residence of elementals, specifically of the duwende or engkanto.

Atimonan, our paternal ancestors’ hometown in Quezon province and neighboring town of Gumaca, was known for its beach resorts but they had never significantly figured in my childhood summer vacations.  I would associate it with clan reunions, and I remember having attended two as a gradeschooler.

What would come close to a private toilet and bath in my lolo’s house was a small cubicle made of bamboo, located a few steps from the house; in place of a toilet bowl was a hole dug in the earth and one hollow block or stone was placed each on the left and right sides where we could step while squatting. As for bathing, who needed enclosures when there was a stream where we could dip any time we want? My lolo would have a reading (more accurately, chanting) of the pasyon in his house and we would leave that task to the adults. To pass time, because there was no television and other distractions that us city kids were used to, we would all sit by the window of the sleeping area, which was an elevated portion of the house but not quite a mezzanine; there were no bedrooms. Sometimes we would kneel on pillows while we conducted our kapre or tikbalang-watch. And we believed we did see some.It was also during these vacations when I first heard about the New People’s Army; my grandfather told us of their visits in his house, politely asking for food then which he willingly provided.

Memories of Gumaca and Atimonan resurfaced during a short visit in the last week of April in the town of Sampaloc, Quezon for a writers’ workshop. I was immediately gripped by a sense of familiarity with the so-called lay of the land as soon as we entered Lucban, the first town via the Calamba-Los Baños route.We started traversing those narrow roads which were like neatly laid grids.  This grid-like narrow and hilly roads characterized most, if not all, of the towns of Quezon. For this short visit, it was again the river that we had looked forward to, and we were not disappointed. 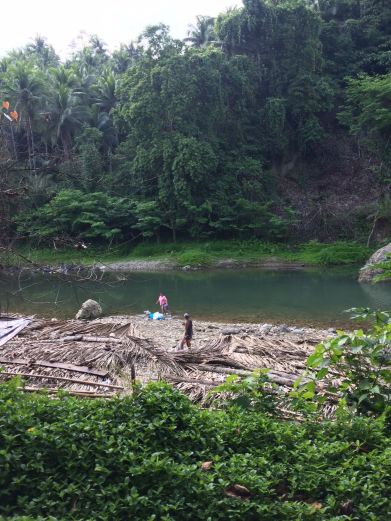 There was a short tricycle ride and some walking involved in getting to the Sampaloc river, but when we got to what our friend and host called as the ‘secret place’, we were more than rewarded. Away from the main body of the river frequented by people, the ‘secret place’ was like nature’s jacuzzi, but with cool gurgling water, not chilly but refreshing enough after our walk under the heat of the sun.And I remembered how it was also during my childhood summer trips. Trekking, exploration, discovery was all part of the river experience. In Sampaloc, I could just have stayed there in the river, part of my body submerged, my head using a rock for a pillow, keeping still, just being.

We got the same warning that had been given me by my own elders. Town fiesta was just around the corner—April 25 for Sampaloc—and it would be during this period when the river claims its offering. We have to be more careful.

Sans this legend that’s present in other parts of the Philippines, the river provides a unique way of communing with and experiencing nature. The river points to that within us; the internal, panloob or paloob, allowing us to know ourselves, our communities and the traditions attached to being near the river; while the sea is for looking outward, for imagining what places are there beyond the horizon.

Clarissa V. Militante is a novelist and teaches under the Departments of Literature and Communications in De La Salle University, Taft. She also works as Communications Officer in the Asian regional non-government organization, Focus on the Global South.