The streets of big cities like Metro Manila are busy and bustling, and they bear witness to the ugly truth that Filipino women who walk through them experience harassment on a daily basis. Streets are not safe for women regardless of what they are wearing.

In June 2018, students walked up and down a ramp in Plaza Salamanca in Ermita, Manila for a street fashion show called #WalkFreefromFear. Supported by the United Nations Entity for Gender Equality and the Empowerment of Women (UN Women) and The Forum for Family Planning and Development, the fashion show transformed the street into a political runway. Students wore messages on their clothes depicting hurtful words that women and female students endure as they navigate the city streets.

Student models with different gender identities and body types strutted and tore off shreds of clothing to reveal the words “malandi,” “pokpok” and “mahalay” which are rough equivalents to “slut,” words often thrown to women and gays mostly by men on streets.  Hurtful and often homophobic street lingo such as “suplada (snub),” “baduy (off-fashion),” and “virgin” were unveiled on the models’ bodies.

Student councils under the Student Council Alliance of the Philippines (SCAP) partnered with UN Women and The Forum to implement the Student Action For Eliminating VAW in Campus Campaign (S.A.F.E. Campus) to address public space sexual harassment in universities and colleges in Quezon City and Manila City.

It was a bid to reclaim “safe spaces” for women and to call attention to the need for local governments and school campuses to ensure that streets and other public spaces are safer for women. The street fashion show was also a call for a dialogue on the need for a national policy to address street sexual harassment and for respect for women regardless of what they are wearing.

Why Sexual Harassment in Public Spaces is a form of Violence against Women?

Dr. Nathalie Africa Verceles, director of the University of the Philippines’ Center for Women’s and Gender Studies, said, “Violence against women, of which sexual harassment in public spaces is one of its forms, is the most egregious manifestation of the obstinacy of male dominance and female subordination in society. It is also a means by which asymmetrical gender relations is perpetuated.”

The Philippines is a model for many countries for having several pro-women laws but lawmakers and advocates agree that there is still a need to put more teeth into these laws. Aside from the country’s laws on rape and the Magna Carta of Women, the Philippines has the Anti-Sexual Harassment Act of 1995 or Republic Act 7877 that declares all forms of sexual harassment in the “employment, education or training environment” as unlawful.

As street harassment is not well-discussed and Filipinos have yet to be fully aware of the need to address the issue, the UN initiative gave its support to the school-based Safe Public Spaces in Schools project that aim to eliminate sexual harassment against women and girls in schools and public spaces.

Street harassment remains a problem among many other cities worldwide. In 2013, UN Women launched the “Safe Cities Global Initiative,” a flagship program covering 25 cities globally to eliminate sexual violence and harassment against women and girls in urban public spaces and to engage local governments to make cities safe and free from any kind of abuse.

Manila and Quezon City local governments passed legislation to penalize sexual harassments in streets. In June 2018, the Manila City Council passed Ordinance No. 7857 which “will penalize all forms of sexual harassment in public spaces such as catcalling, wolf-whistling, leering, groping and many others.”  The ordinance was sponsored by Manila District 4 Councilor, Krystle Bacani. 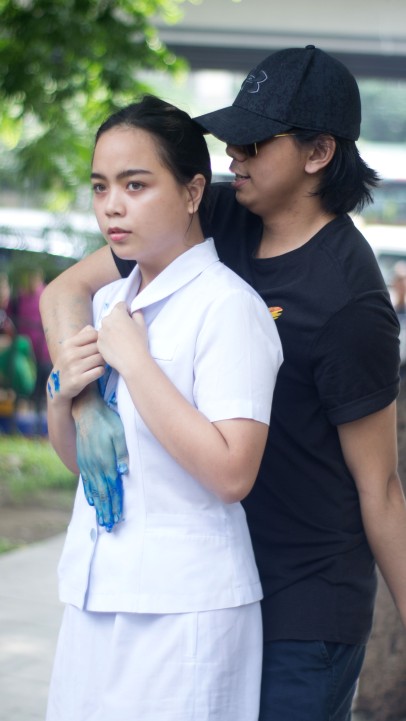 With Manila City following Quezon City’s example, the national government most certainly can, too, according to Sen. Risa Hontiveros, chairperson of the Senate committee on women.  Senator Hontiveros called the Manila ordinance as “historic and groundbreaking,” and “a big victory for women and safe spaces advocates.”

“An anti-catcalling ordinance in the country’s capital is a big boost to the campaign to protect its women from daily street harassment,” the senator said. “This will certainly serve as an inspiration as we push for the passage of a similar policy on the national level.”

Hontiveros is pushing for the approval of a similar measure in the Upper House – Senate Bill 1326, or the Safe Streets and Public Spaces Act. The measure prohibits and penalizes gender-based harassment in public spaces, including catcalling, wolf-whistling, cursing, leering, groping, and persistent request for name and contact details.

UN Women said sexual harassment limits women and girls’ autonomous mobility and affects their well-being. Every woman deserves to walk free from fear and to express their personality through clothing. Sexual harassment happens not because of clothing, but because of the prevailing culture that objectifies women’s bodies. People, particularly men who share these public spaces, should strip off their misguided beliefs about women.